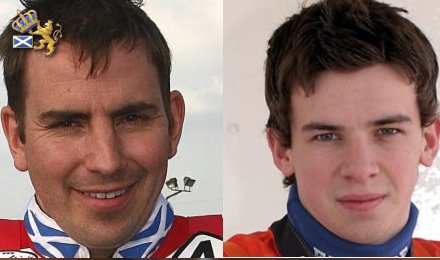 The Scotwaste Monarchs race Redcar Bears on Friday, but it will be a much-strengthened side we face with James Grieves and Charles Wright making their debuts and bolstering a team which has struggled so far this season.

With Havelock, Wilson and Sanchez also in the visiting lineup the match takes on a completely new look and Monarchs will be happy that they are at full strength. Monarchs replace Max Dilger with Cal McDade and if as seems certain Birmingham have taken over at the top of the table after their home match on Wednesday, a win for Monarchs on Friday will see them return to the summit.

(The Redcar team has still to be approved by the BSPA).

JAMES GRIEVES: Everyone knows that over the years the Paisley-born Scottish no. 1 has been one of the top visitors to Armadale.

The recent controversial home match with Glasgow saw Grieves, shall we say, below par, but it would be unfair to blame the riders for what seemed to be going on that night.

Expect a full-blooded Grieves performance this Friday, which means a tough test for all the home men.

WORLD CHAMPIONSHIP: Three Monarchs' riders competing in the first qualifying stage of the World Championship on the continent last weekend.

Kevin Wolbert finished 8th in his round at Gorican, Croatia and so qualified for the next stage which is on 3rd July.

Ryan Fisher finished 10th at Fjelsted, Denmark though there seems to be a possibility that he will be elevated due to the disqualification of a rider who finished higher up but used a faulty silencer.

Tobias Busch scored 1 point at Balakovo, Russia and is definitely not through. Of former Monarchs' riders, Rory Schlein and Thomas H Jonasson qualified and Jozsef Tabaka just missed out.

PREMIER LEAGUE STANDINGS: At this moment Monarchs top the table with 26 points from 9 matches. Birmingham have 25 from 12 after a great away win at Somerset, and Rye House have 24 from 9.

STRENGTHENED BEARS: The announcement at Redcar last week that James Grieves would be returning drew the biggest cheer of the season at the north-eastern venue.

Grieves had two excellent seasons there (2008-9) and indeed has been an excellent team man at all of his clubs which includes Edinburgh.

He will scarcely have expected to be left out of the Glasgow lineup but will certainly be appreciated at Redcar. He replaces Henning Bager who had achieved little in his outings for the team.

Likewise ex-Workington rider Charles Wright will be a big improvement on the inexperienced Gary irving at reserve. Wright has been turning out for Buxton in the National League.

The others in the Bears' lineup are sure to be boosted by the new arrivals. Gary Havelock, Ben Wilson and Emiliano Sanchez have on gone well in recent times at Armadale and this is surely the strongest Redcar lineup of the season by far.

MAX GOES: Monarchs informed their German rider Max Dilger on Tuesday that he was out of the team after several weeks of struggle. He was signed in the belief that he could improve his three point average and he has had some good race results (beating Sedgmen at Birmingham, Neath at Rye House) but too often things haven't gone right for him. He hasn't been helped by the after-effects of his dislocated shoulder sustained at Workington. Max is very popular behind the scenes and everyone wishes him well.

CAL JOINS: Scot Cal McDade (23) has already had a few outings for Monarchs this year, in the blue and gold race suit designed by his dad. He now steps into the position vacated by Max Dilger. He returned to the sport this year after a season out, and has put everything into his attempts to break through in both National League (for King's Lynn) and Premier League. He feels the recent purchase of an engine from William Lawson has been important and now gets his big chance to impress at Armadale.

NEXT MEETING: The fixture for Friday 25th June will be announced on Friday.