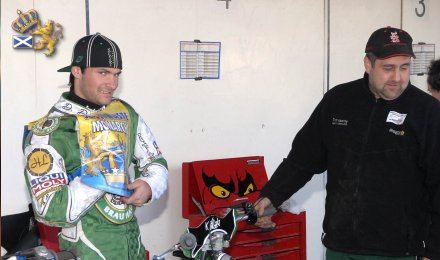 KEVIN THROUGH TO UNDER-21 FINAL

Kevin Wolbert qualified from the Latvian semi-final of the World Under-21 Championship on Saturday, but Kalle Katajisto missed out in Krsko.

Right from the off in Landshut Kevin was on form and showing his intentions by beating strong contender Rene Bach in his first heat.

He had ten from four and although he finished pointless in his final race, an all-star heat 20, he was comfortably through. His results were:

Poole and Poland's Artur Mroczka finished eighth after slowing in his last heat, thinking the heat was over after three laps. There are only 7 qualifiers though you would imagine that Mroczka would be a strong candidate to pick up the ?regular wild-card' slot.

Meanwhile over in Slovenia at Krsko, Kalle did not have such a good time, and scored just 4. His chance will come and perhaps he will benefit more from his UK experience this summer than he would have from racing in the Final.

Britain continues to fall behind at all levels of the sport, with their only representative Joe Haines going out on 6 points in Landshut.

The three legs of the final are: