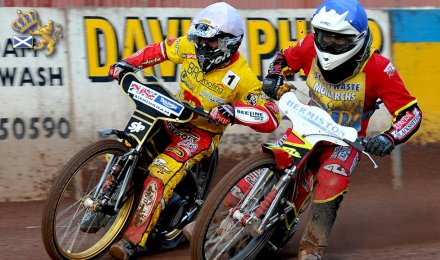 The Scotwaste Monarchs rode brilliantly (with Ryan Fisher in sensational form) to deservedly take all three points by beating the Lyons-inspired Birmingham by 54-41 to go 9 points clear at the top of the Premier League.

The match provided some of the best racing of the season, with two incredible last-bend wins for Ryan Fisher and some classy riding by Jason Lyons, who engineered a heat 11 8-1 to bring the Brummies back into the match.

Tully, Wethers and Katajisto all produced some exciting racing also and Monarchs were more than good value for their win. Birmingham were actually a little disappointing though they did not give up ? Richard Sweetman had a poor match and it took Steve Johnston three rides to get going.

Monarchs lost the opening race, won by Lyons, but recorded 5 5-1s over the remainder of the match. Ryan Fisher was at his most outrageous, pipping Sedgmen on the line in heat 10 and then topping that with an incredible ride in heat 13, chasing Johnston while holding off Lyons and finally swooping off the final bend to grab the win, punching the air in delight.

The next league fixture is a fortnight away (Rye House) with the Keyline Scottish Open coming up next week.