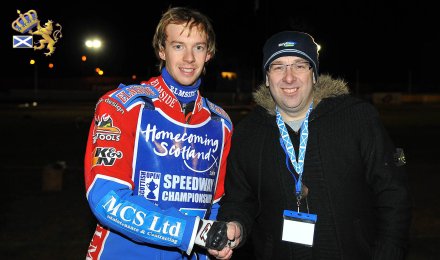 Winner and Sponsor back in March Image Credit: Ron MacNeill

The Keyline Scottish Open provides this week's speedway at Armadale (7:15pm start) and the field looks like one of the most intriguing ever put together.

Admission prices for the 22-heat event are ?18 for adults, ?14 for OAPs and ?5 for children between 12 and 15. Accompanied children under 12 will be free as normal.

THE HOME CHALLENGE: Although Monarchs have unusually suffered three home defeats this season, few would deny that several of their riders are outstanding Armadale specialists.

The last home victor was Rory Schlein in 2004, his last year with Monarchs. The six Monarchs in this year's field will be trying to add their name to the plinth on the MSSC Jack Young Trophy.

THE KEYLINE VIEW: Keyline manager Fraser McDowell is looking forward to his company's fifth year as sponsors of the Scottish Open.

He said ?I always enjoy the Scottish Open, I think it is one of the best individual meetings and it is one in which I feel all of the riders will be trying.

?As for a winner, well there are several in the frame but I think James wright and Rory Schlein won't be far away."

ERIK PUDEL is due to make his UK debut having been suggested for a chance by Kevin Wolbert's management.

JAMES WRIGHT was a happy and deserving winner of the 2009 Keyline Scottish Open which was staged as the first meeting of 2010.

ANDREW TULLY has finished fourth in the last two Opens!

JOE SCREEN finished third in the 2008 event but this is the first time he has worn the red-and-white of Glasgow at Armadale.

CHRIS SLABON has just rejoined Ipswich and recently pipped Ryan Fisher to the Welsh Open. Monarchs have previously tried to sign him.

KEVIN WOLBERT has missed the last four Monarchs' matches but is desperate to improve on his last Open, a nightmare night of crashes, a blow motor and no points!

RORY SCHLEIN rightly says ?I've never lost a Scottish Open since I won it in 2004.? Mum and dad Lyndon and Lynette will be there to watch.

THOMAS H JONASSON was recently runner-up in a Grand Prix qualifier semi-final and would love to impress on his return to Armadale.

JASON LYONS was in sensational form last Friday and could go one better than his 2006 second place.

KALLE KATAJISTO is the sensation of the Armadale season and is capable of anything!

MATTHEW WEATHERS faces a marathon journey back from Peterborough where he races for Wolverhampton on Thursday night.

OLIVER ALLEN has just lost his place at Elite League Ipswich and will be keen to put himself in the shop window for a new club.

TOBIAS BUSCH is looking for a good performance after a porrish run at Armadale recently ? but he was a match winner at Newport.

GINO MANZARES of the USA Dream Team made a highly impressive debut at Armadale last Friday and is handed the chance of a full meeting.

WILLIAM LAWSON returns to action after his 28 day ban for quitting Belle Vue ? he was a double figure scorer in the last Open.

RYAN FISHER finished second (to Wright) in March, and second (to Slabon) in the Welsh Open. How much would he give for a first place?

NEXT MEETING: Monarchs take on Rye House in the Premier League at Armadale on Friday 30rd July.

AWAY MATCHES: On Sunday Monarchs go to Glasgow to race their outstanding Premier Trophy section match. It is for pride only as the finalists in the competition are already known ? in fact Birmingham and Newcastle meet on Sunday in the Final first leg!

Monarchs will race without Kevin Wolbert at Glasgow.

Next Wednesday Monarchs are at King's Lynn for the Knockout Cup quarter final first leg, and for that one they will be at full strength.