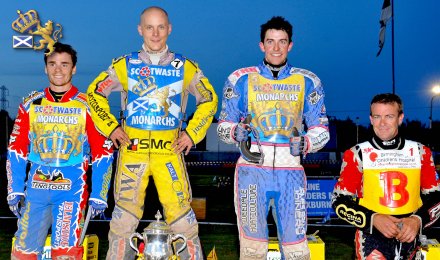 Josef '?Pepe' Franc was a surprise winner of the Keyline Scottish Open as he raced home well in front of the Grand Final.

The Czech hadn't made a good start to the meeting with three third places, but once he started gating there was no stopping him. He said ?I was only invited one day before the meeting but I had to accept because it is a prestige meeting.

"It has to be the best moment of my career."

In spite of the strong lineup, is was a meeting which never really took off as a spectacle ? too many fallers and not enough exciting heats. There were tyre problems and amongst the early fallers were Screen, Schlein, Katajisto, Fisher, Slabon - and Tobias Bisch who had been leading team mate Fisher in heat 4.

Favourite Rory Schlein never really got going, and it was Jason Lyons who made a lot of the early running. He won his first three heats and was the leading qualifier for the final.

He was joined there by Oliver Allen and Andrew Tully, both consistent throughout.

There was an almighty scramble for the semi-final places. Joe Screen recovered from his fall to score 11, and looked a real threat. Ryan Fisher won a tough heat 18 after a brilliant first corner to also make the semi, in spite of two falls earlier, and the others in the semi were Chris Slabon who made a good Armadale debut and Pepe Franc, who won his final two qualifying heats.

Another strong first corner gave Ryan Fisher the lead down the back straight - but he swung wide round the pits bend and fell into the fence! Second placed Franc kept going, both Screen and Slabon slowed and that was that ? they were out.

Fisher must have been kicking himself but it left a pretty surprising final lineup of Franc (gate 1), Olly Allen (gate 2), Lyons (gate 3) and Tully (gate 4).

After the first turn Franc was never challenged. Allen was under pressure from Tully for second but held on, with Lyons never in the hunt.