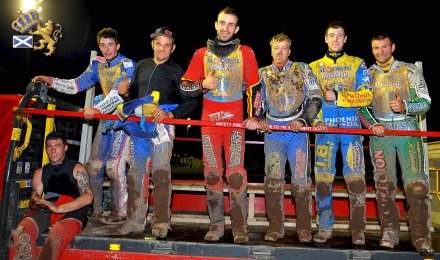 The Scotwaste Monarchs have pulled off some amazing results this season, and here was another as we pummelled the King's Lynn Stars 56-34 on their own circuit in the Cup quarter final first leg.

It was so reminiscent of our 20-point win at Rye House in that we attacked the track and took control of the match right from the start, and established such a lead early on that there was no way back for the Stars. There had been some pre-match drizzle but it certainly didn't affect our side.

There was drama in heat 1 as King's Lynn guest Chris Schramm fell on the second lap, right in front of the Monarchs' pair of Fisher and Busch who laid their bikes down instantly.

Unfortunately both Ryan and Tobias suffered machine damage and while Ryan had a good second machine, Tobias was again forced to borrow bikes. He is enjoying no luck.

We had the first five race winners ? Fisher, guest Carl Wilkinson, Wethers, Tully and then Fisher again. By that stage we were 21-9 ahead and the home heads were down.

Both Mathew Wethers and Andrew Tully gated well (it's true!) and the whole team were contributing. Cal McDade showed great steadiness for a paid win in heat 2 after top home reserve Chris Mills suffered a 2-minute exclusion and went off 15 metres.

Kevin Wolbert started with two thirds and didn't look comfortable, but he switched bikes and looked back to his best in his last two, especially with a brilliant outside pass on Topinka on the second bend of heat 12.

Ryan Fisher was unbeaten in his first four rides, including a great win from the back over Mills in heat 11, and there was more overtaking from the Monarchs in heat 14 after Wortmann made the start, only to be passed by our excellent guest Wilkinson and Wethers.

The only heat we lost was the last one in which Ryan Fisher suffered a machine problem, and Stars took a 5-1.

King's Lynn promoter Buster Chapman is promising changes, so we will see who they field in the second leg a week on Friday.

Monarchs will use Arlo Bugeja in the team this Friday, replacing Cal McDade who has shown bags of spirit in his time in the team. It is felt that Arlo's extra experience will help in the matches to come.