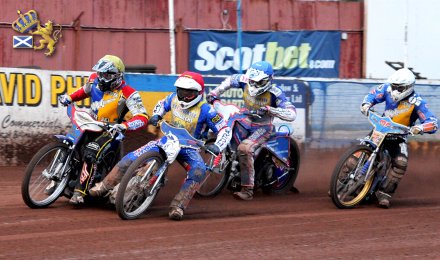 A WIN, BUT ROCKETS GRAB A POINT

The Scotwaste Monarchs made a strong start to the match but Rye House grabbed a point in the end in a 49-43 home victory.

For that they had to thank great displays from Linus Sundstrom and Jordan Frampton, and although Ryan Fisher had been the star of the show for most of the night, the Rockets' top two took a last heat 5-1 to earn their team a point.

?I'm well pleased with that,? said Rockets' team boss John Sampford who in company with captain Chris Neath was a late arrival.

?We were very poor at Workington last weekend so to come to the home of the champions=elect ? it has to be Edinburgh or Newcastle for the title ? and take a point, was very pleasing indeed.?

Fisher had the two rides of the night, passing Frampton in heat 6 with a great outside overtake, and beating the top two Rockets in heat 13. But he missed the gate in the final race and lost a lot of ground.

Monarchs were ten up after three heats, but threw too many points away, not for the first time at Armadale. Two falls for Tully and an engine failure for Wolbert were important moments.

Reserve guest Josef Franc scored well with 12+3 but didn't ride as well as he did last week in winning the Scottish Open.