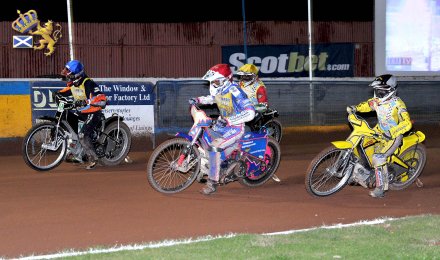 The Scotwaste Monarchs took another big win in the Playoff semi-final first leg when they beat Sheffield 59-31. The second leg is not a formality but the team have given themselves a very good chance of reaching another final.

As we almost take for granted now, the incredible Ryan Fisher sailed to another full maximum 15 with apparent ease.

The remainder of the top five all went well. Matthew Wethers dropped a point only in heat 15, and that in spite of the fact that he took a heavy fall on the first bend of heat 6, and required lengthy treatment. Typically he has back on his bike for a paid win in the rerun.

Andrew Tully was quite brilliant, and would have scored a maximum but for a last bend accident in heat 11. He had pulled off a superb overtake on Ricky Ashworth for the second time on the night, only to lift leaving the last corner, hit the fence and slide over the line on the ground with his bike ? Ashworth having regained the lead.

In spite of this Tully again rode a great race for a heat 13 5-1 with Ryan Fisher.

Kevin Wolbert also dropped just one point and looked very powerful, and Kalle Katajisto was beaten only in his opening ride.

For Sheffield Josh Auty was way off form but there were some decent heats featuring Josef Franc and Ricky Ashworth, and a good reserve's display from Simon Lambert who beat Lawson in an excellent heat 2.