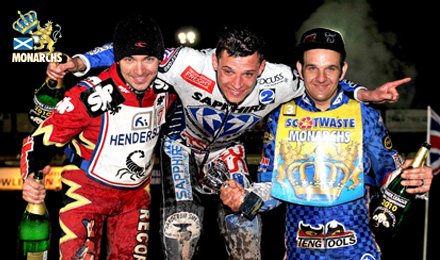 Ryan Fisher made a brave effort to secure the Premier League Riders Championship at Sheffield on Sunday before losing out in the Final and finished a highly creditable third.

After a slow start in the qualifying races Ryan took charge in his last two races winning them both in style including a breathtaking charge to the front on the last lap of heat 19 to secure a place in the semi final with 11 points, along side David Howe, Travis McGowan and local man Josh Auty.

He duly won the semi final to join Newcastle duo, Rene Bach and Kenni Larsen, who had dominated the qualifying heats, and Howe in the Final. The Diamonds duo clashed in the run to the first bend and although there was some feeling for Larsen to be excluded referee, Dan Holt, invited all four back. After a lengthy delay the riders went to the tapes again and it was Larsen who took the lead followed by Ryan and Howe in third. Ryan lost his second position to Howe on the second lap.

Ryan was a disappointed man at the end of the night but we still know that he is the best rider in the Premier League.