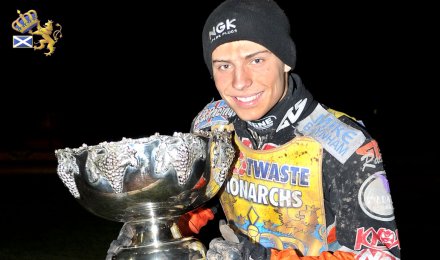 YOUNG ASHLEY IS BACK

16 year old Ashley Morris will line up for the Scotwaste Monarchs again in 2011.

He will combine Monarchs' fixtures with racing for Dudley in the National League and so faces a busy season once again. In 2010 he joined the team on 27th August and proved popular with the fans for his stylish efforts.

A former British Under-15 Champion, he is happy to be coming back saying ?I am pleased to be back because Edinburgh took the time and gave me the chance to feel the level of the Premier League, and no other club did that, so I'm glad to go back and show my respect for the club.

?Everyone obviously knows that my gating wasn't really up to scratch but once I got round the first bend I was up to speed with them, or near enough.

?All the points I did get were mainly from the back, and earning them not being given them, so I was quite happy with the way I went really.

?The whole team was great, the atmosphere on the track walks, always having a laugh. Once you're enjoying yourself you are half way there. The team bonded, and if I was struggling with my bikes I can go up to anyone and ask, and they will help me.

?I've spoken to a lot of fans, and to the club itself, and they told me from day one there's no pressure on me as long as I'm gaining experience. I didn't want to have too much pressure first time in the Premier League. But obviously this year we need a strong pair of reserves so I want to be scoring more.?