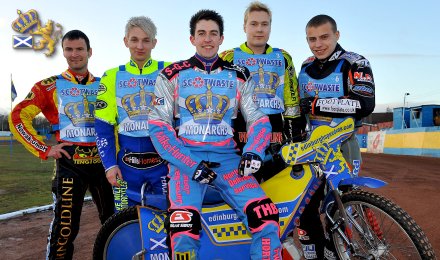 The Scotwaste Monarchs announced that 26 year old Australian Jay Herne will be their final signing for the 2011 season, though he was not able to attend the practise session at Armadale today.

Jay is the top average rider in the National League and has previous Premier experience with Birmingham and Somerset. Indeed his performance for Birmingham in 2008 was crucial in the match v Somerset which clinched the Premier League title for Monarchs that year!

His last appearance at Armadale saw him score 3+1 for Birmingham in 2009.

He had bad luck with injuries last year but made a highly successful comeback with his NL club Bournemouth at the end of the season. He faces a long weekly journey but was so keen to accept our offer that he has spent the last few days arranging transport for himself to get him to Scotland each week.

With Matthew Wethers also missing due to passport technicalities (he will arrive in the UK on Monday) there were just five Monarchs present to try out the track in front of a fair gathering of fans.

All seemed to cope well with the slightly reshaped track. New boy Craig Cook wore a very bright race suit in blue and gold, and both Andrew Tully and Ashley Morris were resplendent in new gear.

Kevin Wolbert wore his Birmingham outfit, but will have more familiar colours in time for the opening match next Friday night.

Andrew reported a slightly sore arm after his first outing since breaking it last October, but he is looking forward to the real thing next week.