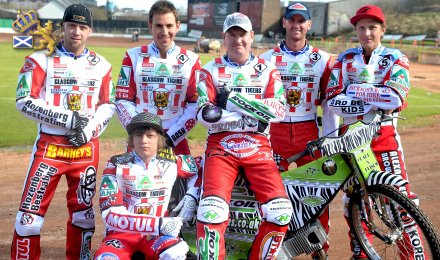 NEW-LOOK GLASGOW ON TRACK THIS FRIDAY

The start of Glasgow's home season has been delayed while they complete their track alterations, but the Tigers will be in action this Friday at Armadale in the first leg of the Spring Trophy, and they come through with renewed confidence that this time, their team is good enough to make a big impression.

Just three riders remain from their side which finished 2010, and there are four ex-Monarchs in a side which has far more Armadale experience than Monarchs do!

THE THOR TROPHY: There will be a feast of racing on Friday because in addition to the 15-heat match with Glasgow, a group of six young Scandinavian riders (4 Danes and 2 Swedes) start a tour of the UK with a visit to Armadale.

They will race against Monarchs' Jay Herne and Ashley Morris in an individual event over 8 heats and a final.

Best known of the visitors is Klaus Jakobsen (ex-Stoke and Birmingham) and the others are Patrick Tarp, Jonas B Andersen and Mikkel Salomonsen (Denmark) plus Alexander Edberg and Oliver Berntzon (Sweden).

KEVIN'S NEW ENGINE: Kevin Wolbert had a desperately disappointing first home meeting of the season last Friday and has moved quickly to do something about it.

?I spoke with Kalle after the meeting about using an engine he has which was specially prepared for Armadale.

?I will try it on Friday, and if it is good I will buy this engine. Peter Carr has prepared it for the track.

?The engines I have work at Birmingham and bigger tracks but it seems they are not OK for Armadale. I must score more points for myself and the team.?

On Sunday the Scotwaste Monarchs go to Tyneside to try to reverse the situation. Matches between the clubs have often resulted in away wins and Monarchs have certainly not given up on their first silverware of the season. Start time 6.30pm.

SOLID VISITING SEPTET: Glasgow's team planning has gone well this winter with seven capable riders slotting into their side.

Double British Champion Joe Screen leads the way and he should be a match for anyone in the Premier League. James Grieves has returned from a spell at Redcar with an average he should be able to increase, and there are two ex-Monarchs slotting in at second string.

Theo Pijper was Monarchs' captain and track record holder in 2006 but after a spell in the Elite League he was frozen out with an unrealistic average for a period of years. A rules revision sees him return on loan to Tigers with an average which now looks unrealistically low!

Christian Henry last rode in the UK at King's Lynn in 2009 but he too should be capable of adding to his average.

Aussie Josh Grajczonek may be on the verge of a big breakthrough in the sport, and there is a really powerful tail to back up the top five.

Former Monarch Michal Rajkowski is well known for his high scoring from the reserve berth, and highly promising Aussie Nick Morris should build on the rich promise shown in 2010.

LAST WEEK'S MATCH: The Scotwaste Monarchs were beaten 44-46 by Newcastle in the first leg of the Premier Shield last week. Top Monarch was Matthew Wethers with 11.

NEXT WEEK'S MATCH: The defence of the Premier League starts on Friday 8th April against Redcar Bears at Armadale (7.30pm). The Bears track Jason Lyons and Aaron Summers this year in addition to Gary Havelock.