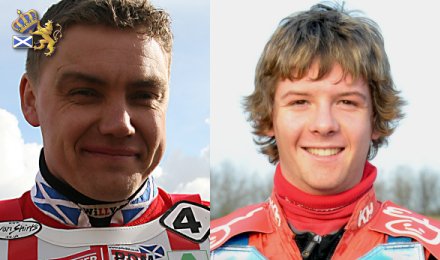 DICKEN AND HOWARTH COME IN

The Scotwaste Monarchs have made two changes in their team with immediate effect (subject to BSPA approval), bringing in experienced Lee Dicken and youngster Kyle Howarth to fill the numbers 6 and 7 positions.

Jay Herne and Ashley Morris have struggled this season and the Monarchs' promotion have reluctantly called time on their efforts.

Kyle Howarth (17) guested for Monarchs at Berwick and scored 4 points, which might have been more but for a fall in the penultimate heat whilst ahead of the Berwick pair. He won a ?Monarch of the Match' award last season on a previous guest booking.

Lee Dicken (32) is of course a recent captain of Glasgow and was very popular throughout his five seasons at Ashfield. Recent Armadale appearances have generally been successful ? he was on the winning side for both Glasgow and King's Lynn last season!

Monarchs' promoter John Campbell said ?We have made these changes because unfortunately we have not been getting the points we need from the reserve berth. It is hard because I have a lot of time for both Ashley and Jay ? I hoped and expected that they would have done better this year.

?We know both Kyle and Lee well and we know that they will fit into our setup straight away without a problem. Kyle has shown us what he can do already.

?Lee we understand rode while unfit last year to help his team out. We know he can improve on his 2010 performances. He's not the kind of young rider we usually sign but the ones we did sign haven't come up with the points!

?These riders were available at the start of the year and we chose to go in another direction. Now we are asking them to come and show us we were wrong to do so.?