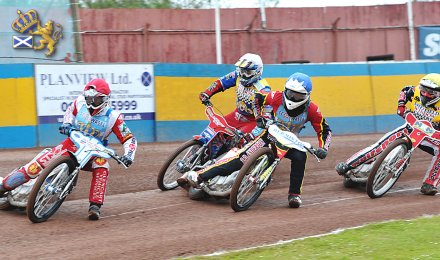 Off to a good start Image Credit: Ron MacNeill

TRUE GRIT FROM THE TOP FIVE

The Scotwaste Monarchs gained all three points against Sheffield, which was an excellent achievement considering the way the enforced team changes on both sides seemed to work against them. It took a great deal of determination from the team's main scorers.

There was a constant drizzle, heavy at times, but all the riders showed a willingness to press on to complete the match.

47 points from the top five offset the minimal contribution from the reserves, who in spite of no shortage of effort could only manage a couple of gift points against the 9 from the visiting reserves. We are all only too aware that this is an ongoing problem.

Given that Shane Parker (4 race wins) and Aaron Summers were amongst the Tigers' top five, the main Monarchs deserve great praise.

We started with a 5-1 from guest James Grieves and Matthew Wethers after Sheffield's guest Summers was excluded on 2 minutes. Although Sheffield drew level in heat 2 we regained the lead in heat 3, and never lost it.

It felt very tenuous at times though! The lead was reduced to 2 points after heat 8, and it took a bold move by Kalle Katajisto in heat 9, passing Parker, to extend the lead. Shane fell, and clearly felt he had been impeded, but the referee saw no reason to stop the race. We took a 5-1 and went six points up, and pressed on from there.

Cook and Tully won the next two heats, but heat 13 was crucial. With a six point lead, and the Summers-Parker pairing in opposition, Monarchs could not afford a maximum reverse. Yet when the Tigers made the gate it looked as though this might happen.

Enter James Grieves. Off gate 1 he bored hard under the Sheffield pair and forced them wide, allowing Craig Cook to race under everyone and into the lead. Aaron Summers than came back hard, and passed Grieves, but the 4-2 put Monarchs 8 up with 2 heats left.

Another heat 14 win for Kalle ensured that we won the match, and although Parker won the final heat, the hard chasing Cook plus Katajisto ensured that we kept Summers well at the rear and gained all three points.