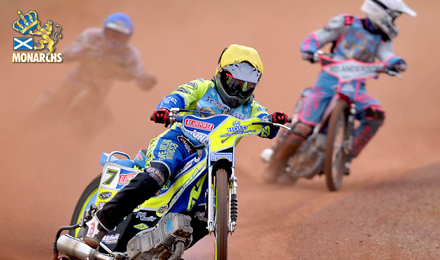 Craig Cook and Andrew Tully both had their moments, though not really at the same time, as the Scotwaste Monarchs went out at the qualifying stage in the rain-affected Premier Pairs.

Our first heat was against Ipswich in heat 4, an excellent ride by Cook he very nearly forced his way past race leader Doolan several times.

We may still have won the heat with Tully lying third, but in the latter stages Poole caught him with an outside pass.

In heat 10 we went down 7-2 to the impressive Redcar pair in spite of another good chase by Cook.

Heat 14 was Andrew's best race and one of the heats of the night. He had a great battle with Masters, passing and re-passing before the Aussie took the 4 points with a hard final turn. Cook lifted and lost ground in the early stages.

In our final ride Ricky Ashworth was excluded after a first bend fall, and Craig Cook took an easy win with Andrew just failing to catch Shane Parker.

Rain threatened early and and there was dust in the early stages, causing delays while the surface was damped down. Towards the end the track was very wet but the riders coped well and there was some good racing.

Glasgow were deserved winners and were the cleverest combination. Their toughest heat was the semi final against Sheffield in which Screen had to fight past Parker for third to avoid elimination.

Runners up were Workington and the other semi-finalists were Redcar.