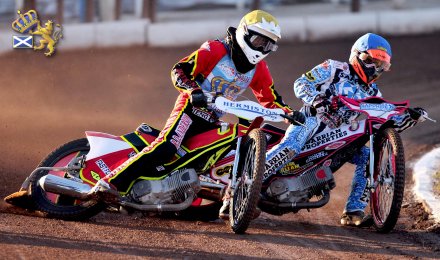 The Scotwaste Monarchs face tough opposition from Newcastle this Friday, the start of a spell of 6 matches in 10 days.

There will be a new face in Monarchs' ranks for Friday because Lee Dicken has failed to reach the form everyone hoped he would. Lee drops out with immediate effect and his replacement will be announced as soon as the new lineup is approved by the BSPA. Newcastle have had a troubled season but have shown great resilience and are still putting up excellent performances home and away.

THE END FOR LEE: The match at Glasgow on Monday has turned out to be the last for Lee Dicken, who failed to score on his old track.

It looks as though he will call it a day in the sport and concentrate on assisting his son Kean to make the grade in Speedway.

In a career stretching back to 1994 Dicken has always been an enthusiastic competitor and a great team man. He was Glasgow captain a year ago, but injuries have taken their toll.

Monarchs' promoter John Campbell paid tribute to him and said ?Lee deserves the highest praise in attempting to get everything right to find his best form. Although things haven't worked out for him, I think he has tried really hard to get his bikes going.?

SIX IN TEN DAYS: After the home match with Newcastle, Monarchs will head south to make their first appearance at the new Leicester track on Saturday. With Kevin Wolbert in the GP qualifier semi that day, a guest will be used at no. 1.

Next Wednesday and Thursday Monarchs race at Somerset and Sheffield respectively.

The riders always welcome a busy period ? as long as men and machines remain unscathed!

CRAIG COOK: Top of the averages based on this season's matches, Craig Cook injured his wrist at Newport on Sunday and missed the visit to Glasgow on Monday.

It is hoped that he will be OK for Friday but we await the final word from Craig.

MEETING SPONSOR: Sponsoring Newcastle's visit on Friday is enthusiast Maurice Gordon, who will invite friends to the George Hunter Memorial Lounge for the evening. Maurice from Peebles has been a backer of many events at Armadale.

TOUGH DIAMONDS: Newcastle started the season as one of the favourites to win the Premier League, but they have suffered badly with injuries and other problems, showing great resilience to fight back and maintain a very high standard.

The first major loss was Rene Bach, many people's choice as likely league no. 1, who was ruled out for the season with a bad leg break in April.

The tragic death of signing Matej Ferjan has overshadowed everything, and it has been revealed that this was due to a blood clot on the leg.

Mark Lemon has been the next casualty with a collar bone injury sustained on Sky TV. He missed a few matches, came back ? and then bowed out again when a further injury was discovered.

He will be replaced by James Grieves as a guest rider, and PL Pairs champion Grieves is in great form.

Stuart Robson has been one of the league's best riders, and it was fortunate for Newcastle that they acquired him on a gift average at the start of the season.

Battling Derek Sneddon, new Dane Claes Nedermark and young reserves Newman and Worrall have all performed well as Diamonds have fought back from these problems, and Jason King has returned from the injuries which caused him to miss the early part of the season.

NEXT WEEK'S MATCH: The next home fixture for the Scotwaste Monarchs is on Friday 8th July against Somerset, who were the early pace-setters in the Premier League.