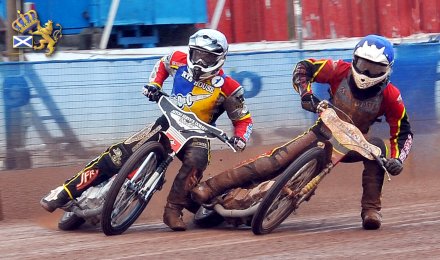 The Scotwaste Monarchs welcome the Rye House Rockets to Armadale this Friday for the rerun of the match which had to be abandoned on 27th May ? when Rockets were leading!

Only two heats had been run but the Rockets are expected to be dangerous opponents. Their no. 1 Jordan Frampton, a British Finalist this season, has been excellent on recent visits, and riders like captain Chris Neath, Steve Boxall and Nelson are expected to do well. Monarchs will be at full strength.

SECOND PHASE FIXTURES: Although the hoped-for mark of 10 home and 10 away matches has only been reached by a few teams, the split of teams for the second phase of fixtures has been organised.

A full set of invitations has been issued and as the riders confirm they are being announced this week on the club website www.edinburghmonarchs.co and also on www.be-there.co .

Reigning champion Josef Franc will be defending his title and previous double winner Rory Schlein (2004 and 2008) will be back, in great form and obviously a strong contender to take a third title.

There will be additional attractions announced for what will be the 400th Senior Speedway meeting at Armadale, though obviously the main attraction is the 22 heats of action to decide the 2011 Keyline Scottish Open Champion.

NO ELITE FOR KEVIN: Kevin Wolbert has been dropped from his doubling up position at Birmingham (as has his fellow double-upper James Wright) with Brummies' promoter Graham Drury citing the unpredictability of second-phase fixtures in both leagues which has made rider availability uncertain. This will be a blow to our no. 1.

PLYMOUTH RAIN-OFF: The weather has been a severe problem throughout Speedway recently, and perhaps the most awkward fixture in UK speedway, Plymouth v Edinburgh (2 Friday tracks 400 miles apart) was rained off last Saturday.

There is no restaging date arranged yet.

ROCKETS WELL PLACED: Rye House are almost always close to the top of the Premier League, and they are again one of the better sides this year in spite of two surprising home defeats (Newport and Newcastle). They have balanced these up with wins at Newport and Plymouth, plus single points at Berwick, Ipswich and Somerset.

They will certainly be looking for some reward on Friday from Armadale, where they took a deserved point last season. Jordan Frampton was instrumental in that with a great performance, and he is going even better this season.

Experienced captain Chris Neath has often done well at Armadale and is in excellent form, and it will be interesting to see how Steve Boxall goes. Regarded as an up-and-coming talent a few years ago, he has had some troubled seasons but since returning to the Rockets' side recently he has shown every sign of getting his career back on the rails.

Luke Bowen is a strong man down at reserve and his partner Nelson (formerly Tyson Nelson) is an Aussie of great potential who actually won heat 2 when Rockets visited in May (the match was then abandoned).

LAST MATCH: The Scotwaste Monarchs recorded their biggest win of the season last Friday when they beat Plymouth 64-28. Andrew Tully, Craig Cook and Kyle Howarth were all unbeaten, in Kyle's case for the first time in the Premier League.