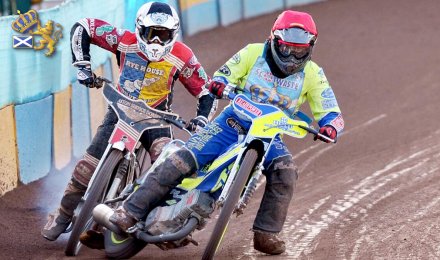 The Scotwaste Monarchs gave one of their best displays of the season to beat Rye House 55-37 tonight.

None of the home men finished unbeaten, though Kalle Katajisto and Andrew Tully both reached the final heat with four ride paid maximums before losing out to a fine ride by Chris Neath.

Rockets' captain Neath was the best visitor but all of the Monarchs' top five rode well, as did Tim Webster at reserve. This meant that an off-night for Kyle Howarth didn't have any serious effect.

Katajisto gave one of his steadiest displays of the season, riding sensibly and skilfully, and the speedy Tully was also at his best.

Craig Cook pulled off a brilliant pass to thwart the Frampton TR, passing the Rockets' no. 1 on the last lap, and both Kevin Wolbert and Matthew Wethers dropped points in just one heat each.

Tim Webster's first two rides were excellent, and although he then came to grief in his next two, he has shown the Monarchs' support the potential that he has.

Kyle Howarth came down after leading heat 4 when Boxall passed him, and also fell in his next ride, but he can be excused as he has a big day tomorrow at Rye House.

For the Rockets, Neath and Boxall rode well, the reserves were handy but Jordan Frampton wasn't quite as impressive as expected.