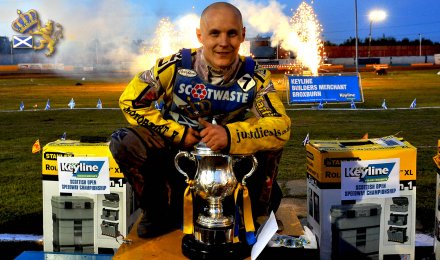 Speedway came to Armadale in 1997 and on Friday we reach the milestone of the 400th senior meeting at the track, with the latest staging of the Keyline Scottish Open Championship.

This in itself is a historic event, having run in various guises since the sport's first year in Britain in 1928, and featuring several World Champions amongst its winners. This year former Monarch (and two-time winner) Rory Schlein seems to be the clear favourite but there are numerous other contenders who will be doing everything they can to stop him ? not least the six home riders in the field.

KEYLINE BACKING: Keyline Broxburn have been the most prolific meeting sponsors throughout the Armadale era of speedway, and this is their sixth successive year backing the Scottish Open.

This year they will be supported by co-sponsors Ibstock Scottish brick who will be attending for the first time.

Keyline's manager Fraser McDowall says ?I like the look of the lineup this year, nice and even.

?I'd say they are about ten potential winners. Rory has an obvious chance but the likes of young Tully can be as quick as anyone.

?I'm looking forward to it, fingers crossed for the weather obviously.

?Any of the home lads could do it, though maybe for Kyle it will just be a chance to gain experience.

?I'm not sure how Seb Alden might do. Oliver Allen and James Wright might win it as well.?

HOME WINNER?: One feature of the season so far has been the excellent form of the Monarchs' own top five of Kevin Wolbert, Kalle Katajisto, Andrew Tully, Matthew Wethers and Craig Cook. Can one of them become the first home winner since 2004 (Schlein)?

Tully has been a finalist in the last three Opens and is rarely passed round Armadale.

Kevin Wolbert would love to improve his poor record in the last two Opens, and Matthew Wethers has been impressive in the last two events after previously not finding his best form.

Monarchs' captain Wethers says ?I would really like to make the final. That would be quite nice, and once you get in the final anything can happen. So that's my goal.

?It is a tough field though, and any of our own riders could get there. If any of the Monarchs make the start in the final it will be very hard for anyone to pass.?

WILL SCHLEIN MAKE IT THREE?: There are three former winners in the field in Rory Schlein, James Wright and the holder Josef Franc.

Rory's form for Belle Vue this season must mark him as favourite but he will be conscious of the struggles he had in the 2010 meeting which didn't go well for him.

He faces Elite League opposition from King's Lynn's Oliver Allen, who was runner-up in 2010, and this year's home challenge seems stronger than ever.

Tyson Burmeister and Joe Haines have joined the field as neither Sergei Darkin nor Ty Proctor of the originally-announced riders is now available, and there are a couple of fitness doubts still to be resolved.

AWAY ON SUNDAY: There is Premier League action also this weekend for the Scotwaste Monarchs who go to Glasgow on Sunday to try to halt Tigers' march towards the title.