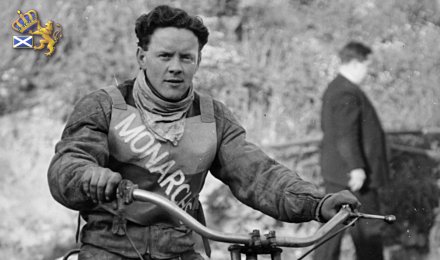 Monarchs lost another link with the post-war boom years of the sport when Jackie Campbell died today at the age of 85.

Jackie was from Edinburgh, and was an all-round motorcyclist all his life, competing first in trials and scrambles. He had visited Marine Gardens speedway in 1938 and tried speedway initially in 1949.

He made the team for the Northern Shield matches in early 1950, and had a longer run during 1951, but he was impatient for further meetings and when he didn't get them he gave up the sport.

Recalling his speedway years at Old Meadowbank, Jackie said ?I can still remember the lights and the size of the place, but when the tapes go up you can't hear the crowd. People tend to look on speedway as a circus but it's a difficult sport, a really hard ride. Nobody gives an inch.?

He enjoyed the company of the other Monarchs of the time and remembered Dick Campbell as a great guy.

In his working days Jackie was with Alexanders, Rossleighs and a company named Wilkie Paul's. He had five children, the youngest of whom (Ian) competed in road racing.

Jackie and his family were still well known to many Monarchs' fans and everyone will join us in sending condolences to the family.