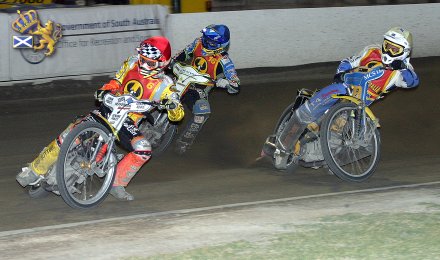 The newest Scotwaste Monarch Micky Dyer could afford to be quite satisfied after an improved performance at Gillman lifted him to 11th in the final Australian Championship standings.

In the third round he grabbed three seconds and a third after touching the tapes in his first ride, which suggests that he is warming up after his long break from speedway.

Coming back to action after several months away to ride in the national final was always going to be a tough test.

Micky will probably look on this as a warm-up for next Saturday's under-21 at Kurri-Kurri.

Aussie Champion once more is Chris Holder, no surprise there, with Davey Watt and Cameron Woodward also making the top three.