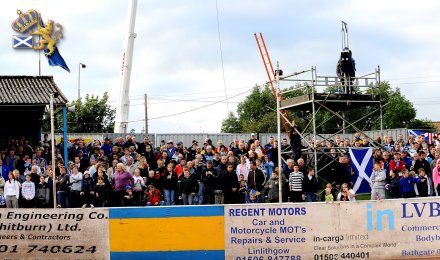 ADMISSIONS 2012: BUY THEM ONLINE FOR THE BEST DEAL

Scotwaste Monarchs are pleased to announce their admission prices for the 2012 season and in doing so hope that many of the concerns raised by supporters in the past will now be alleviated. The ticketing system will be based on advance sales either at the previous event or online.

Said co-promoter John Campbell, ?From within our own resources we have developed the most sophisticated online ticketing system in British Speedway and it is only natural that we should try to develop this further. We put our toe in the water with this system in 2011, we listened to the alternative suggestions and now believe that we have put in place everything to make it the preferred method of ticket purchase in 2012.?

?For those who are not yet connected to the internet, we will still offer tickets at the stadium for the following week's meeting. For those purchasing online the deadline will now be moved to 11.59pm on the Thursday night before the meeting. Anyone buying a ticket on the day of the meeting will have to pay a premium, whether it be an online purchase or by walking up to the admission gates.?

The Scotwaste Monarchs Promotion have also taken cognisance of previous comments from supporters about the overall pricing structure and have added additional elements to the prices available.

The full list of admission prices in 2012 will be:

SENIORS 65 and over on production of proof of age: ?12

Tickets purchased on the day of the meeting will be subject to a premium.

Thereafter the premium on all prices will be ?1 unless otherwise announced.

The cost of the match programme will increase to ?2.50 for normal editions but supporters who present their car park ticket to the programme sellers will be given a discount of ?1 on the cover price. The Scottish Open will be a special edition selling at ?3.

John Campbell closed by saying, ?Obviously we have a wide range of ticket prices based on age and, as such, we will be making far greater checks on documentation confirming age. Therefore I would ask everyone who is not purchasing an adult ticket or who is not under 5 to carry proof of eligibility at all times. Those who purchase tickets online will, similarly, be asked for confirmation of eligibility as they enter the stadium.?