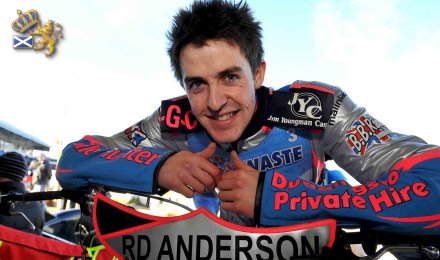 ANDREW IN THE BEN FUND BONANZA

The first Scotwaste Monarch in action in the UK 2012 season will be Andrew Tully who competes alongside many World-class riders in the Ben Fund Bonanza at Birmingham on Sunday 11th March.

He becomes the first Scot ever to race in this prestigious meeting, now the traditional season opener in Britain, and he will be competing against 8 past or present Grand Prix riders including triple world champion Nicki Pedersen.

Andrew said ?I'm really pleased to be in, especially the way the field is taking shape! Maybe I'm a lesser light in that lineup but it's all in a good cause.

?I've had my fair share of help from the Ben Fund so it's good to be able to give something back. It's good to get some early season racing as well.

?I like Birmingham, I was disappointed when they went into the Elite League which meant I wouldn't be there regularly. Maybe the top riders will all be focussed on taking each other out and I'll be able to pick up some points!?

Andrew is one of only 5 Premier League riders who have been selected for an event for which many riders volunteer their services. All of the proceeds go to the Speedway Riders Benevolent Fund which gives invaluable assistance to seriously injured riders. It is the fourth staging of the meeting since it began at Sheffield in 2009.