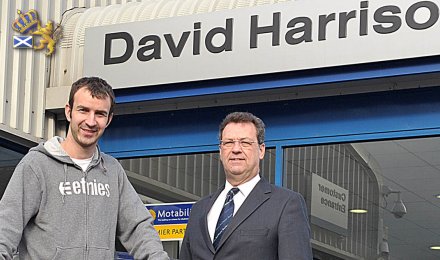 David Harrison Ford will be sponsoring this year's Scottish Open event which is opening night at the Scotwaste Arena, Armadale on March 23rd.

This will be Harrison's first speedway sponsorship although they advertised with the Monarchs last year and had cars on display at last year's Scottish Open.

Matthew Wethers went down on Friday for a photo session and met the owner Bob Harrison at their premises in Peebles. Mr Harrison said ?We're delighted to have arranged this involvement with the speedway.

?I have been before, to Powderhall in the days when Gulf Oil were sponsoring the team there.

?I've been told about the history of the event over more than 80 years and we are looking forward to it.?

The event will be the David Harrison Ford Scottish Open. The company are aware of having quite a few connections with Monarchs through their business, including club director Ian Sneddon and others.

Harrisons themselves date back even further than the Scottish Open, ?D Harrison Motor Engineer? being the initial business started in 1925 by Bob Harrison's grandfather David, and continued after the war by David's son, also David.

They are also based in Galashiels. Some of the Harrison vehicles will be on display during the Scottish Open, and riders for the field should be announced shortly.