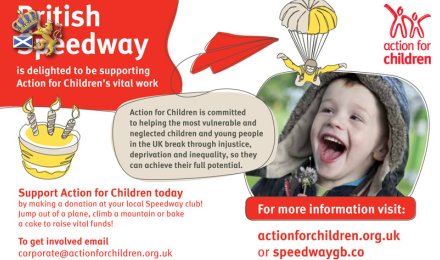 Edinburgh supporters will have their chance to join in with the sport's involvement with the Action for Children charity during the cup tie against Rye House Rockets tonight.

This link with the charity was announced by the BSPA earlier in the season.

John Campbell says "British Speedway has formed a national partnership with this charity with an aim of raising £25000 to help them provide their life changing services. The four main areas of work of this charity are; supporting vulnerable and socially excluded young people, disadvantaged families, disabled young people and children in care.

"I'm sure supporters will agree agree that it is a very worthy cause to support. There will be collecting buckets on the way into the stadium and also at the Club Shop, Video Table and T Bar throughout the meeting."

Tonight's collection was arranged some time ago, and the club are also committed to allowing the Armadale Gala organisers to hold a collection next week.

Supporters have understandably been asking if they will have a chance to contribute to a collection for the dependants of the late Lee Richardson, and this will be held during June.