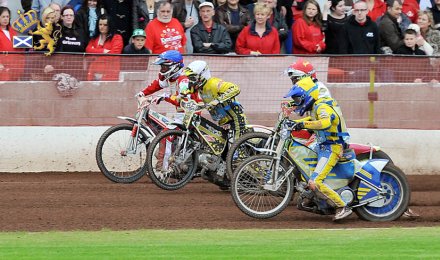 FALLERS BEING CHECKED OUT

We went down by 12 points at Ashfield today after being in contention for a point with a couple of heats remaining. More importantly, we hope there has been no serious damage done to three of our riders who suffered mishaps in the latter stages.

Early reports on Theo Pijper were a suspected broken wrist after a last bend clash with Joe Screen, but Theo thinks that might not be the case and is visiting hospital tonight.

He said "I was trying to pass Joe on that final turn but he closed the door and I hit his dirt deflector. I managed to keep control and stay on the bike but my wrist is painful.

"At the track they thought I had broken it but I thought it popped out and back in again."

Micky Dyer came down in heat 9 and didn't race again, but he doesn't think he did any further damage. He has a scheduled visit to have his foot examined tomorrow and has earned everyone's admiration for turning out this weekend.

Andrew Tully took a purler on the last bend of heat 13 after leading the race to that point, but he was OK to come out in the final race.

We weren't at our best on a heavily watered track, and made a poor start to the meeting even though Glasgow had come from Rye House the night before. We trailed 20-10 after heat 5 and used a TR in the following race.

Our support suddenly woke up in heat 8, not that we had what would have been our first race winner, but because Marcel Helfer suddenly cut loose and went high up the banking, sweeping into third place past Robert Ksiezak!

It was the first sign we have seen of the ability we hope the German has and earned applause. This move was, believe it or not, the first and last overtake of the meeting.

It looked as though Andrew and Micky were inspired because they hit the front in the next race, but unfortunately Andrew drifted into Micky's path and he lost position. Micky came off on the fourth bend of lap 3 with Andrew awarded a comfortable win.

After two sluggish rides, Theo Pijper then found his form and led Joe Screen all the way with Matthew Wethers in third spot, and we were 8 down.

It wasn't Craig Cook's day, the top average man in the PL wasn't on song, but he did try tremendously hard to find a passing line on James Grieves in heat 11. No joy.

Joy in heat 12 though – another Pijper win and the best ride yet from Helfer who rode a steady four laps, staying ahead of no less a rider than Josh Grajczonek.

That reduced the gap to just 4 points and we looked like keeping it at that with Andrew Tully leading all the way in heat 13, pressed by Grieves – till Andrew shot across the final corner and fell.

Matthew won heat 14 but Marcel was at the back this time, leaving us needing an advantage from the last heat to take a point. That was never on the cards after the first bend, and we can only hope Theo is fit after that last bend incident.

Six of the Glasgow riders won races, and James Grieves won five of them, so we have no real complaints.

It wasn't a great display by Monarchs against the strengthened Tigers, but at least we made more of a fight of it than seemed likely at one point.