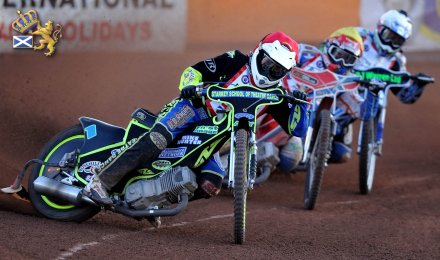 Craig Cook gave a superb display in the British Final at Wolverhampton tonight, and was very unlucky not to qualify for the semi final.

He really made the commentary team sit up, giving the big guns a run for their money and finishing his night with a win over home star Tai Woffinden. His display impressed GB team manager Neil Middleditch because he immediately awarded him the vacant place in the British team to race Australia at Poole on Wednesday.

Heat 3: We’ve been aware that Cookie’s first ride is rarely his best, and he would be disappointed not to get 2 points here. He had a good battle with Stead for second place behind Barker but lost out late in the heat. 1 point.

Heat 7: Great start, riding a widish line which suited the slicker than usual Monmore Green, and won by a large margin from Roynon and Lanham. 4 points.

Heat 9: Great battle with Chris Harris no less, taking the lead on the first lap, and though passed on lap two, he was never far away. Six points.

Heat 14: Third all the way but within feet of the duelling Nicholls and Kennett. Seven points.

Heat 20: Up against Woffinden but made a great start and never allowed Tai a sniff of a chance. Well deserved win. Ten points.

But for a lucky second for Simon Stead in one of the heats, Craig would have been in the semi. There were a few gift points floating around but Craig never seemed to get any of them!

His finishing position was seventh in an enjoyable meeting won by Scott Nicholls, who had started badly but pulled off some great overtakes.