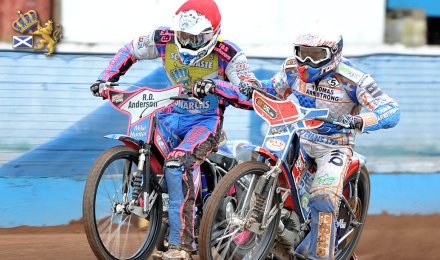 The Scotwaste Monarchs close their 16th season of racing at Armadale, the wettest ever, by racing Workington Comets in the Premier Playoffs on Friday.

Having failed unluckily and by the narrowest margin to win at Workington last Saturday, Monarchs can’t qualify themselves, but they will decide who does. The Comets need to win to go through, if not Scunthorpe will race against Somerset in the final to decide the Premier League Champions. If Monarchs take all three points they will finish second in the group. Of course Monarchs will be led by the new Premier League Riders’ Champion Craig Cook.

Monarchs purchased him from Workington last season when he surprisingly became available.

He started brilliantly but by his own admission lost his way a bit, putting too much pressure on himself.

During the winter he sat down with the Monarchs’ promotion and vowed that things would be different. They certainly have been, and with his dad by his side throughout, plus other members of his team.

He has been brilliant, cool and calculating and has a great future in the sport.

PHOTOS WITH COOKIE: It is hoped that supporters will get the chance on Friday to have their photos taken with the champ for a small fee.

We’ve still to finalise details with the man himself but the intention is to have Craig available at Hospitality between 6:30 and 7pm on Friday.

We will give more details shortly.

THE PLAYOFFS: Just to summarise, the situation in our section of the Playoffs with just Friday’s match to go is:

SEASON 16: Friday’s match brings Monarchs’ 16th Armadale season to an end. They have finished 5th in the Premier League (prior to the Playoffs) and reached the KO Cup semi Finalists, won the Spring Trophy and provided the Premier League Riders’ Champion.

COMETS NEAR FULL STRENGTH: Workington have had another unlucky season with injuries, but for these Playoff matches they are close to full strength. Adam Roynon returned last weekend, and both Richard Lawson and Rene Bach say they are fit to ride after injuries last weekend.

Kenny Ingalls has been out for some time but American Kenny would no doubt admit he struggled badly last time he was at Armadale!

It should be an entertaining finish to the season. The Comets are still in the KO Cup (semi-final second leg) but the weather foiled them in the league cup, from which they have now been eliminated, and realistically they will look on the Playoffs as their best chance of winning something in 2012.

Former Monarchs Ashley Morris and Kyle Howarth will be key men at reserve.

LAST MEETING: The Scotwaste Monarchs beat Ipswich 52-37 in the second leg of the KO Cup semi-final, but went out 87-92 on aggregate. Craig Cook and Theo Pijper were unbeaten for Monarchs, and Jozsef Tabaka had engine failures while leading in each of his first three heats (leading each time!)

NEXT MEETING: There has been no announcement yet concerning season 2013 at Armadale.