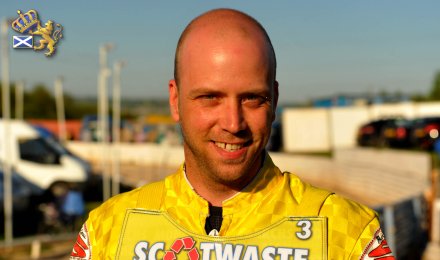 THEO IS A MONARCH AGAIN

Theo Pijper is the second name to be announced for the Scotwaste Monarchs’ team for the 2013 season.

Theo made a very good return to Armadale in 2012, which was his seventh as a Monarch. He said “I was happy at Edinburgh, I know the track and I know I can score well there every week.

“The aim is of course is to get a little bit better every year, and of course it helps if the team is good. If the team goes well everyone wants to do well.

“Jozsef is back in the team, he will be quite determined again I am sure, and I’m hoping Cookie will be back of course.

“Andrew and Matthew might be going somewhere else so I don’t know who else will be in the team.”

The Dutch star is a former track record holder at Armadale but even so after so many seasons away, he perhaps surprised a few with the quality of his performances.

“The year before I was determined to come back and do well with Glasgow, and I did do well in the last part of the season.

“Last year of course I wasn’t well in the beginning of the season but as I got better and my bikes were working well, things came good. It’s all the people behind the scenes who help too, it’s not just the rider himself. If you’re head is clear and there’s no pressure it makes it easier to do well.

“Next year I would like to double up a little. Wolverhampton would suit me, kind of similar tracks!”