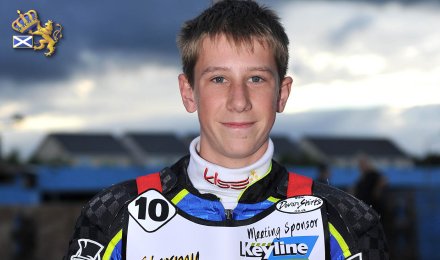 George says "His first race was a win over Jason Stewart and Shane Parker, in a time just 0.78 seconds more than Mark Lemon's track record created in 2005!!

"The crazy race format had 14 riders split into two groups and Max had Shane, Cam Woodward and veteran Jason Stewart in his group. The format dictated that he meet Cam THREE times, and on each occasion, although making a valiant effort on turns one and two, Cam had the better of him.

"In fact he hit a huge hole at the stating gate in his 4th and final heat which threw him into the air, but he managed to regain control superbly into the first bend, although allowing Stewart through in the process.

"His eight point total easily put him through as third qualifier to the first Semi alongside Cam, Shane, and Jason Stewart.He lost out to Cam again, but thanks in part to an (EF) for Shane, managed through to the Final.

"The Final itself was a cracker, with Max pushed out on the first turn, in spite of a brave attempt to round the field from gate three.

"Just as well, as Cam and Justin Sedgemen were knocking lumps out of each other, and of course the inevitable happened and Cam spun entering the third turn, third lap, and there was carnage.

"Max, some way behind, managed to avoid all the debris, but the Meeting was over and no rerun took place."

Next up for the 16 year old will be Friday's Australian Championship qualifier at Gillman on Friday, a big meeting for all competitors.