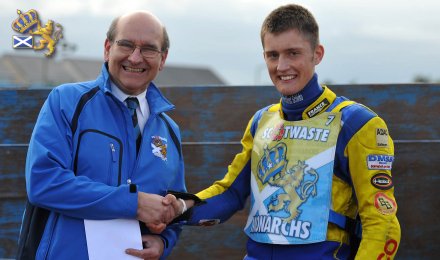 The Scotwaste Monarchs are bringing back 21 year old German rider Marcel Helfer for his first full season in the UK, completing their team for the 2013 season.

Marcel joined the club in early July 2012 after having ridden in pre-season practise, and while he had his ups and downs, a full average of 4.05 from scoring 80 points in 19 league matches was a reasonable start in British speedway.

He is the reigning German Under-21 Champion and contested last year’s Grand Prix qualifiers, but he is well aware that he has to translate some of his continental form into UK achievement.

He says “I am very happy to be back with the Monarchs and I hope I can help the team to be successful and maybe win the PL.

“Sometimes British tracks were hard for me because conditions were often wet, and more grippy than in Germany.

“I hope I will be able to have en engine done by Peter Carr as my fellow countryman Kevin Wolbert did before me, to give me a better chance of riding Armadale well.”

Supporters were often bemused by Marcel’s form last season as he could struggle badly at times, then burst into life with some excellent race wins. He pulled off match winning rides at both Sheffield and Berwick, and was robbed of another at Leicester when he took the lead in heat 14 only to lose a chain.

If he can find his best form more often, then the club are confident that he will be a success.