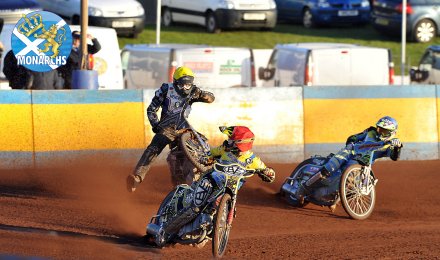 Interesting moment for Lewis Blackbird in a heat which had already been stopped. Image Credit: Ron MacNeill

UP TO FOURTH PLACE

The Scotwaste Monarchs pushed up to fourth place in the Premier League, with matches in hand on the teams above them, when they beat reigning champions Scunthorpe 56-36 tonight.

Remarkably that's the third week running with exactly the same score! Unlike last week though, Monarchs led from heat one and the outcome never seemed to be in any doubt. Scunthorpe were rather disappointing with David Howe having a disastrous night on a track he used to excel on.

Ashley Birks had another good Armadale night, and Lewis Blackbird picked up steady points at reserve. To be fair to Josh Auty, though his score looks poor, he was often in the thick of the action. He fell while in second place in heat one.

For Monarchs both Craig Cook and Theo Pijper were brilliant as always, with just a point dropped by Theo to Auty in heat 5. Craig almost dropped one to the same rider in heat 13 when a team ride with Claus came unstuck, and Craig had to pull off a last bend pass on Auty to regain second place.

There was a season's best 8+2 from Derek Sneddon, unbeaten till his last ride, and Claus Vissing also scored 8. He hasn't got his Armadale setup to his liking yet but believes he will get there soon.

Jozsef Tabaka scored 8+1 and was introduced to heat 11 to counter the TR ride by Birks, only to run an unusual last place.

Mitchell Davey didn't make any starts this week but picked up three thirds, while Max Fricke had just one paid win to show for his efforts after he had stopped in his first race.

Overall the team's form is excellent but we don't have another league match for a fortnight, with the PL Pairs and the Cardiff GP next weekend.

Before then we go to Ashfield on Sunday for our final League Cup match, with qualification for the