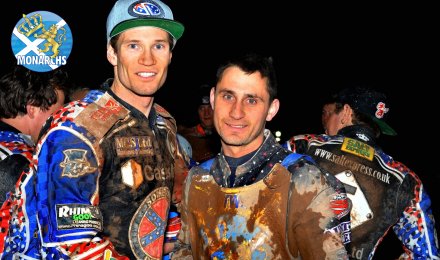 Just as a brief postscript to the fascinating Playoff Final tie we have just been through, here are a couple of thoughts from the Somerset side of the fence which speak well of our part in the tie.

Ian Belcher is part of the Rebels' organisation and he told us:

"Edinburgh gave it everything and all associated with the cub can be very proud of the club's efforts last night, you certainly made it difficult for us. I must say that speaking with Derek Sneddon in the bar afterwards, he was extremely generous in his praise of the Rebels at a time when he must have been feeling a bit down....though the drink probably eased the pain!"

We also had a communcation from Rebels' fan Chris Overd in which he told us:

"I am an avid Somerset Rebels supporter and also supporter of speedway in general and feel that I after the two legged final I have just witnessed I feel that I must drop you and your club a few lines.

"What a fantastic competition the final turned out to be and to be honest although your battling lads finished runners up I feel that they gave a fantastic account of their selves and acted in a most sporting manner, they are a credit to your club.

"I feel the Edinburgh Monarchs and the Somerset Rebels have been very equally matched and to be honest we have had some cracking matches between us this season with some spectacular racing.

"Some of your Supporters stayed on and joined us in the Rebels clubhouse last night to watch the presentation and what a great bunch they were and most welcome, this is why our sport is so unique, how many other sports would fight tooth and nail in a final contest and then mix altogether and have a few beers and some friendly banter, like one big family?

"On a finishing note please send my best wishes to Jo Tabaka and wish him a speedy recovery, I'm certain that I speak for all of the Rebels supporters.

"Thanks again for being such fantastic competitors and promotion, I wish you and the Monarchs all the very best for the 2014 season."

The Scotwaste Monarchs were not in it to lose of course, and with better luck we might not have done, but we have at least done ourselves proud with our efforts and the way we have gone about things.