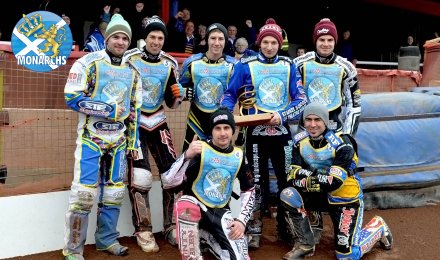 FIRST AWAY WIN OF THE SEASON

The Scotwaste Monarchs completed a very satisfactory opening weekend by winning at Glasgow today in a hard fought and entertaining match. We get the Spring Trophy again.

It was actually our gating which won the day, and from Glasgow’s point of view they would have to be highly encouraged by some of the overtaking moves they made and also by the promise of their younger riders.

On our side, we saw once again just how dominant Craig Cook is. He took 5 wins and any time anyone looked like beating him out of the second corner, he simply lined them up and cruised past.

Thereafter, not a hint of an error. And as so often before, when three points were needed in the last heat to secure the win, there was never a doubt.

The others with particular cause for satisfaction are Stevie Worrall (11 from 4 but also some machine damage) and Sam Masters who scored paid 10 and showed his ability to team ride.

Max Fricke scored 8 which is fine though he can move up a gear yet.

Justin Sedgmen managed a race win but that was all he got, and Derek Sneddon lacked his usual gating skills though his two third places were important ones.

Our American is finding out that it isn’t easy to get up to Premier League pace when it’s all so new, but this week he is heading down to visit Team Cook in Workington where he will be given assistance with his machine preparation.

We were behind only briefly (heat3) in the match though we were pegged back a few times. When Sam Masters team rode Steve Worrall (heat 4) and Justin Sedgmen (heat 6) to race wins, we probably thought we were on the way to a win, but two heats later when Anders Thomsen pipped Steve from the back in heat 8, we were back level.

Again we went ahead in heat 10 after a great cutback by Max Fricke, but we lost that in heat 12 in which both Tigers came from the back.

We always looked safe on aggregate but the match could have gone either way. Stevie Worrall took his third win in heat 14 with Derek Sneddon keeping Kasper Lykke Nielsen at the back, so it was the old familiar situation of needing a Cook victory (and maximum) for the match.

He delivered without any problem, and Sam took a third place also, so we won by four. Craig’s maximum was his first ever at Ashfield, he has been brilliant there several times but has always dropped a point somewhere.

Both weekend meetings were well attended so the clubs have been boosted in their fundraising for which we should thank everyone, perhaps most of all the riders.