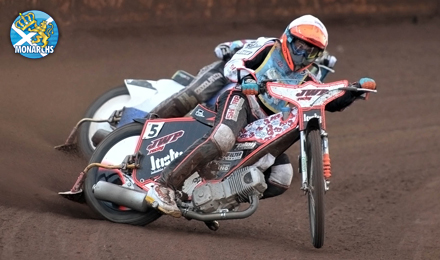 IT'S A LONG WAY

We try again to open our league campaign on Thursday evening with a near 400 mile trip to Suffolk to race the Ipswich Witches.

It's a new month and new averages take Justin Sedgmen up to number 2 in the team and Aaron Fox moves down to reserve. Ipswich are seen to be one of the strongest teams in the Premier League being solid all the way from number one Richie Worrall all the way down to Adam Ellis at reserve.

It's a tough opening league match for the Scotwaste Monarchs but Craig Cook, Justin Sedgmen, Derek Sneddon and Sam Masters have all done very well at the circuit previously. Of course, for Aaron Fox it is a new experience for him.

Sam Masters sensibly decided to break the long journey south and he has been in action on Wednesday evening at King's Lynn for Leicester. He scored five points from his four races, winning his last race.

Also on Wednesday evening the second semi final of the British Championship took place and joining Craig Cook in the final at Wolverhampton next month will be Tai Woffinden, who won the meeting with a dominant fifteen point maximum, together with Steve Boxall, Lewis Blackbird, Lewis Bridger, Richard Lawson, Richie Worrall and Jason Garrity.

The first of May is a big racing day in Europe and the good news from Hungary is that Jozsef Tabaka will make his return from the nasty injury picked up at Armadale in October in a European Pairs meeting taking place at his home track of Debrecen on Thursday. We'll all be watching to see how he gets on.