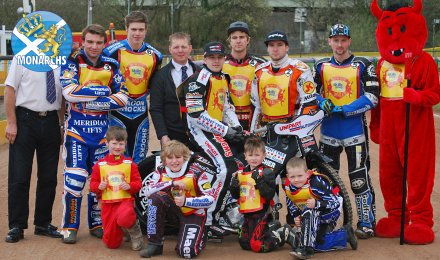 The Devils without Kalle and with Ashley Taylor beheaded Image Credit: Nick Truscott

LIVELY DEVILS WILL BE ENTERTAINING

The Scotwaste Monarchs race Plymouth Devils at Armadale on Friday, which means the visit of two of the most eagerly awaited opponents Ben Barker and Kalle Katajisto, not to mention top Danish prospect Rasmus Jensen.

It's an entertaining lineup and the Devils have been doing well on their travels whilst being a bit vulnerable on their own track, where Monarchs won in May. The belligerent Barker has topped the Premier averages in the past and is a Great Britain international, while the Finn Katajisto of course was part of the Monarchs' league-winning team in 2010 and is one the most spectacular riders we have seen at Armadale.

AARON'S RETURN: Aaron Fox will be fit to take his place in the Monarchs' lineup this weekend after missing the last two weeks due to his leg gash.

He said on Monday "It's healing up nicely. I think another day or two and I'll be close to 100%. I'm ready for Friday."

RECORD CONTINUES: The Scotwaste Monarchs have now recorded 16 wins and a draw from their 17 matches this season.

Coming up as well as Friday's home match with Plymouth is a trip to Workington on Saturday, sure to be a big hurdle.

Captain Derek Sneddon said "This Friday we have Kalle and Ben Barker visiting with Plymouth. Kalle has proved many a time what he can do round Armadale, and Ben Barker rides as hard as he can no matter where he is. I'm expecting a win though.

"Saturday will be a testing one at Workington and Lawson guesting for Grajczonek hasn't weakened them at all. We'll approach it as we have every meeting so far this year and go down looking for the win.

THE PREMIER LEAGUE: The Scotwaste Monarchs haven't had a league fixture in the past week but retain their position at the top of the league with 24 points from 4 home and 4 away matches.

CRAIG IN THE SEMI: Craig Cook successfully negotiated the Berwick round of the Grand Prix qualifiers on Monday when he scored 8 points in a meeting won by Sweden's Linus Sundstrom.

He will race in the semi-final at either Gorican (Croatia) on Saturday 21st.

UNPREDICTABLE OPPOSITION: Plymouth have had a mixed bag of results so far this season. They have lost at home to Ipswich and Peterborough in the League Cup, and to Edinburgh and Berwick in the League. However on their travels they won at Rye House and took an excellent point at Somerset, and are generally competitive.

Ben Barker seems to have regained his best form since moving back to his former club, and he will be a handful for all the Monarchs. So almost certainly will be Kalle Katajisto who is a former Armadale track record holder.

Young Dane Rasmus Jensen was a great signing for the Devils last season and makes his Armadale debut. He is a regular double figure scorer home and away.

At reserve Sam Simota is likely to be a threat. The Czech is unpredictable but has ridden Armadale well in the past.

LAST MEETING: The Scotwaste Monarchs beat Sheffield Tigers 63-28 in the first leg of the League Cup semi-finals with Craig Cook, Justin Sedgmen and Stevie Worrall all unbeaten by the opposition.

NEXT MEETING: Rye House Rockets will be the visitors to Armadale on Friday 20th June