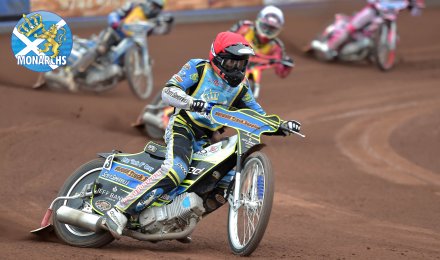 MAX TO THE FORE IN ANOTHER GREAT DISPLAY

The Scotwaste Monarchs performed impressively once again and finished 61-31 winners against Plymouth, with Max Fricke scoring a full 15 point maximum.

The result extended the unbeaten start to the season to 18 matches.

Our young Aussie looked more assured than ever and simply shot from the gate in each of his heats. Ben Barker had won the opening race but in heat 5 he had no answer to Fricke's pace, and that set the tone for the rest of the night for the Devils' no. 1.

Heats 2 to 15 were all race wins for the Monarchs, and three 5-1s from heats 6 to 8 were the ones which killed off the early challenge. Even highly rated riders such as Rasmus Jensen and reserve Sam Simota rarely got a look in.

There can't ever have been a Monarchs' team which gets out of the start quite as well as the current one. Time and again they rocketed from the tapes, often as a pair.

Cook and Sedgmen dropped points only in heat 1 when Barker raced away from gate 3. Sam Masters only missed out when he spun off on the first bend of heat 4 after making a start, thereafter he was dominant and headed Barker twice, including Ben's TR ride.

Stevie Worrall was only beaten in his final ride when he just missed out in a good battle with Mason Campton, and there has to be a special mention for Aaron Fox who smoothly took a win and two paid wins on his comeback. He missed out in heat 11 when Barker and Newman pushed him to the back. Had it not been for Max's heroics, Aaron would surely have been Monarch of the match.

We have to mention the skipper, and it was a bad night for Derek, though he always puts the team first. Just one point from his four rides and he seemed to be trying far too hard and getting into awkward positions. He's at his best when the chips are down, something which is rarely the case these days (but remember heat 14 at Ipswich and Newcastle). We may need a strong showing from him at Workington tomorrow.