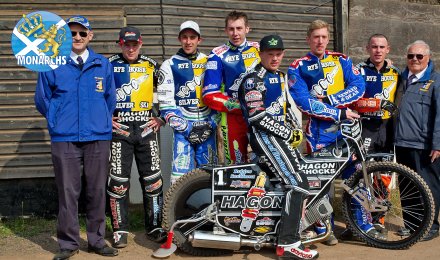 Rye House Rockets provide the opposition for the Scotwaste Monarchs this Friday at Armadale, with a lineup which includes three of Monday’s British Finalists – including the brilliant Jason Garrity.

Garrity was one of the stars of Monday’s event at Wolverhampton, defeating World Champ Tai Woffinden and making the semi-final (he eventually finished as British number 5!) Edward Kennett would usually be regarded as Rockets’ star performer though he had a poor meeting on Monday, and Steve Boxall was Rockets’ third finalist. And they also have the New Zealand Grand Prix wild card at reserve!

LEAGUE CUP SEMI ON THURSDAY: Before the Rockets fly in, the Scotwaste Monarchs travel to Owlerton Stadium in Sheffield on Thursday, carrying a 35 point lead from the first leg of the League Cup semi-final.

Although the lead should be sufficient, the team will approach the match like any other. The aggregate winners will race Peterborough or Workington, with the Panthers six up after their home leg last night.

DEREK LOOKING FOR FORM: Captain Derek Sneddon had one of his poorest Armadale outings last Friday with just a single point from four rides, and he is only too well aware of his recent inconsistent displays.

He said “In the last few weeks I’ve been getting very frustrated and I think I am now thinking too much about it. No matter what I tried the more I put myself in positions I shouldn’t have been in. I was making quite good starts but getting in the wrong place.

“I just want to apologise to everyone including the fans, I really do, I don’t want to be the weak link in the team.”

RECORD CONTINUES: The Scotwaste Monarchs have now recorded 17 wins and a draw from their 18 matches this season.

The match at Workington was abandoned due to lack of ambulance cover last Saturday after injury to Kyle Howarth. This occurrence became a political news item in Cumbria in discussions on health service cuts.

ANOTHER BIG ONE FOR CRAIG: Star man Craig Cook took a brilliant second place from the British Final on Monday, and now faces an even bigger test riding in the Grand Prix qualifying semi-final at Gorican, Craotia on Saturday.

He files out early on Saturday and needs to finish in the top seven of an international-class field.

ROCKETS HAVE POTENTIAL: Rye House have not had a great season so far and last weekend were knocked out of the KO Cup by Glasgow. They have had a couple of home defeate in the league and lost their only away match.

However a lot of their problems have been caused by injuries, whereas this weekend they come to Armadale having named a full team (though no. 7 Nielsen might be a doubt).

It should make a big difference to them because men like Kennett and Boxall are very capable, and Jason Garrity proved on Monday that he is certainly one of Britain’s best prospects, particularly on the smaller tracks.

Both Luke Bowen and Matt Tresarrieu (with Ipswich) have had good matches at Armadale in the past, and at reserve Jason Bunyan should be a threat. He is the man who rides in the New Zealand Grand Prix each year as wild card (he’s English but spends a lot of time in NZ).

Stefan Nielsen rides with Craig Cook at Belle Vue and has been showing great improvement recently.

NEXT MEETING: On Friday 27th June Peterborough Panthers make their first appearance at Armadale for many years – and Ryan Fisher, great Monarchs’ favourite 2008 – 2010 leads an interesting side.