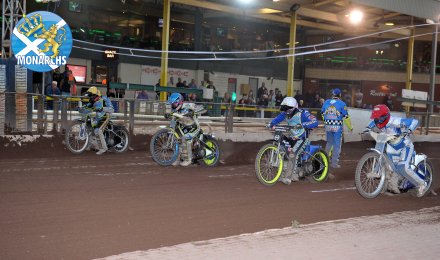 Monarchs win on the track, England lose on the TVs in the bar Image Credit: Ron MacNeill

The Scotwaste Monarchs made it 19 matches unbeaten so far this season by eventually overpowering Sheffield 50-40 in the second leg of the Premier Trophy semi-final.

Qualification for the final was never in doubt but the match was close over the first half with Monarchs picking up rather too many last places early on. Once we took the lead in heat 8 with a 5-1, featuring a superb first corner by Justin Sedgmen, there was no looking back.

Craig Cook was tremendous as usual, dropping just the one point to Owlerton specialist Simon Stead in heat 13. Even in that one there was less than a length in it as Craig piled the pressure on. He won the other two meetings with Simon.

Max Fricke was in great form, using all of the track including some outside line runs - this is the fastest way to ride the circuit but only the best can do it. Max finished on 11.

Sam Masters likes Sheffield and rode well for 9+1 from his four rides. He was possibly slightly lucky in heat 4 after a collision with Ty Proctor down the back straight, with Ty ruled out after falling.

As ever Stevie Worrall was a key man, scoring in every ride. He was taken by surprise in heat 2 when Simon Nielsen bundled past him, but he was involved in the 5-1s in heats 4 and 8.

Aaron Fox actually gated in that heat 2 but was outpaced and admitted afterwards "I need to ride harder."

Justin Sedgmen who had had a poor match at Workington last Saturday started with two lasts, switched bikes and rode two brilliant heats to finish with.

And last but not least captain Derek put everything into his racing but had no points to show from his first three. He was allowed all his four outings though and at last came up with a match-winning race victory in heat 14 ahead of Andre Compton.

Sheffield were very sporting and should also be congratulated for running the match on the night of England v Uruguay. It did affect the crowd unfortunately.

So Monarchs now try to make it 20 without defeat against Rye House at Armadale tomorrow.