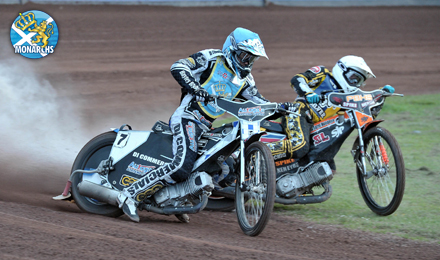 ALES OUT, TV IN

Peterborough will arrive at Armadale on Friday evening without their Czech star, Ales Dryml.

Although Ales completed his fourth ride at Peterborough on Wednesday with a win, he was in agony when he returned to the pits. He had crashed heavily into the safety fence in his third ride. After examination the track doctor signed him off with a back injury and Ales chose to return to the Czech Republic for treatment.

Without him at Redcar on Thursday night, and despite losing Lasse Bjerre with a hand injury in his second race, the Panthers still managed to run the Bears close before going down by four points 47 to 43. Bjerre, apparently, was keen to continue in the meeting but was prevented by the track medical staff.

Meanwhile, it has been announced that the Scotwaste Monarchs will be racing on Sky TV on Tuesday 12th August at Berwick. Sky were very very keen to show the Monarchs on their screens and Berwick was an obvious choice as they have all the infrastructure in place as Berwick Rangers have appeared on a few occasions in the past.

Max Fricke, Stevie Worrall and, in a non riding capacity, Aaron Fox all had a wasted journey to Swindon tonight. The Swindon v Coventry league match was postponed just an hour before start time with heavy rain, that had started two hours earlier, continuing to fall.