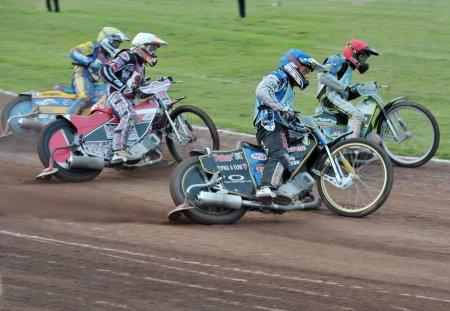 The Scotwaste Monarchs made it 21 matches unbeaten in season 2014 when they beat Peterborough 51-42 tonight, but it was without question one of the hardest matches of the season.

For once the majority of the praise from the evening has to be given to the opposition, because their star man Ryan Fisher had a disastrous night and crashed in both of his races. In spite of that they pushed Monarchs so hard that the home side needed to at least share the final race to take the full three points.

Even then the Panthers' Bjerre and Ostergaard gated, but Craig Cook produced the ride of the night to weave his way outside Ostergaard, then inside Bjerre, on the opening lap to make sure of the points. Max Fricke also slipped past Ostergaard to ensure there were no slip-ups.

That was a key heat, but so was heat 12. With just seven points in it, Ostergaard took a rider replacement ride for the missing Dryml. The big Dane had scored 8 from 3, only beaten by Cook, but this time Max Fricke and Aaron Fox gated on a 5-1. Joe Jacobs was pressing with Ostergaard at the back and that's the way it stayed as Aaron kept cool for his second paid win of the night.

Last heat pair Ostergaard and Bjerre were brilliant for the Panthers and so was Lewis Blackbird who is a hugely improved rider. Unfortunately for them it was a disastrous night for the one and only Ryan Fisher.

Flyin' Ryan fell in heat one on the opening lap, then hit the fence coming out of the second turn in heat 5. After that he was withdrawn from the meeting and we can only speculate what would have happened had our American friend had a decent meeting. He has a collar bone injury and will be out of action for a short time.

Remarkably Peterborough had the majority of heat winners on a night when it felt as though we had more track grading than in the rest of the season put together.

For the winners only Cook, Fricke and Sedgmen were somewhere near their best. For once the usually immaculate Monarchs' gating was a bit below par and that was the reason behind the lowest home score of the season.

It was a surprise that Panthers did not use Ostergaard as a TR in heat 7, though they did get a 6-pointer from Blackbird later on. Equally Monarchs might have used Stevie Worrall in heat 14 in his final match at reserve but chose not to.

Justin Sedgmen will guest for Ales Dryml tomorrow when the Panthers race at Berwick.