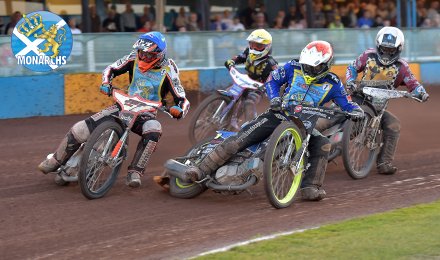 Expectations of a tough tie at Armadale tonight didn't materialise as the Scotwaste Monarchs hit top form, and stormed to an incredible 67-23 victory over Berwick which made it a 106-74 aggregate win in the quarter final tie.

Alex Harkess said "I wasn't happy with how things went in the first leg on Wednesday and I drummed it in to the boys that we must attack from the start tonight and pile up as many points as we could get. They didn't let me down."

Monarchs had trailed 10-2 after two heats at Berwick, but returned the compliment tonight with 5-1s in the first two races. Bandits' Steen Jensen then won heat 3, but three more 5-1 heat results put Monarchs ahead and well on the road to the semi-finals.

By the end the tally was 9 5-1 heat wins, only that one race win for the Bandits and only one last place for Monarchs (an engine failure for Aaron Fox).

Paid maximums for Craig Cook and for Sam Masters who was grinning more broadly than ever as he finally sorted out his gating problems. "I changed everything!" he said.

Wins or paid wins for everyone, lowest score paid 7, and was it a record home win at Armadale? No, not quite because we beat Scunthorpe 68-22 in 2008.

Nobody wants to see massive scores all the time but at the moment, the team can't help it. Don't forget we only beat Peterborough by 9 four weeks ago. Tonight they let rip and the Bandits had no answer.