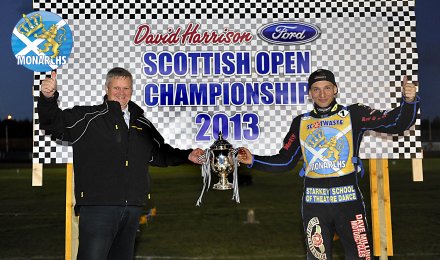 16 riders will battle at Armadale Stadium on Friday for the honour of being the latest winner of a competition which dates back to 1928, the annual Scottish Open Championship, sponsored for the third year by Harrison's of Peebles.

The holder is Craig Cook and the home number one no doubt starts as favourite, but he will be under threat from both his team mates and visiting riders who would love to hold aloft the historic Jack Young Memorial Trophy.

THE LINEUP FOR THE 2014 HARRISON'S SCOTTISH OPEN CHAMPIONSHIP AT ARMADALE ON FRIDAY 1st AUGUST (start time 7.15, doors open 6.30) is:

OUR SPONSORS: Harrison's of Peebles, Ford Dealers, sponsor the Scottish Open for the third time, and will have some of their vehicles on display during the evening.

Club Chairman Alex Harkess has written in the meeting programme "the event is once again sponsored by Harrison's. This pleases me personally because I have known the family for a long time, not just the current boss Bob Harrison but also his dad, who I first started working with some 40 years ago!

"I made number plates for them then and they have stayed loyal to me."

EARLY START: As there are 22 heats in Friday's meeting, the start time is 15 minutes earlier than usual at 7:15pm.

Admission is available online at http://www.be-there.co/ with prices slightly increased on a normal week, but a £3 saving online compared with turnstile prices.

The top three scorers in the 20 qualifying heats go direct to the winner-takes-all final, to be joined by the winner of the semi-final contested by the next four scorers.

FOURS WEEKEND: Craig Cook, Sam Masters, Max Fricke, Steve Worrall and Justin Sedgmen will all be competing for the Harrison's Open but also teaming up on Sunday for Monarchs' defence of the Fours title they won memorably at Peterborough last year. It is at the same venue this Sunday (2:30pm).

Monarchs race in the qualifier against Workington, Redcar and Berwick. The other qualifier is between Peterborough, Newcastle, Somerset and Scunthorpe.

THEO'S TARGET: Glasgow captain Theo Pijper has an unusual target in Friday's big event. He was third in last year's meeting after scoring 12 in the qualifiers, and if he scores 8 this year he will become the highest scorer in the Armadale Opens, passing James Grieves and Peter Carr (72 points each). Theo has scored 65 points in his 7 previous appearances.

INTERNATIONAL FIELD: The only rider actually travelling from an overseas base is Jozsef Tabaka (though Aaron Fox will also be flying in, from Bydgoscz!) there are nevertheless 10 different countries represented in Friday's field.

The two highest-placed English riders not involved in the World Cup (Garrity and Cook) are there (with Robson and Steve Worrall also there), Scotland unfortunately have just one representative, but there are five Aussies mounting a strong challenge.

A German and a Dutchman come from the Glasgow Tigers, and of course are track specialists, and American Aaron Fox returns to continue his progress having supported his country in the World Cup Race-off.

And of course, there is a Hungarian who will probably get the best welcome of the lot.

One place remains to be filled after several candidates were unable to take up the position.

NEXT MEETING: Premier League racing resumes on Friday 8th August when the Scotwaste Monarchs take on Newcastle Diamonds, so often a threat. Monarchs top the table but the pack may be closing in!