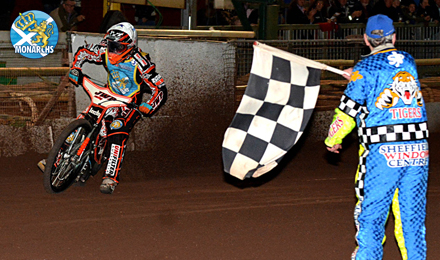 Scotwaste Monarchs scored another away win at Sheffield by 47 to 45 but the score does not reflect the dominance of the Monarchs in the match.

Max Fricke top scored with four great rides for twelve points from his first four rides. Sam Masters wasn't far behind with eleven from five races. Justin Sedgmen produced some clever races for 8 and a bonus from his first three races before being team ridden out of his last race by David Bellego and Ben Wilson. Craig Cook had two wins in his paid nine tally. Stevie Worrall was very unfortunate in heat 14 when he suffered a puncture within yards of the finishing line gifting a5-1 to the Tigers. Not quite the same heroics from Derek Sneddon as Shielfield on Saturday but scored a respectable paid 5. Aaron Fox battled hard in all his races before picking up a deserved point in his last race.

Leigh Lanham was the Tigers top scorer with 15 and guest David Bellego got paid 12.

The Scotwaste Monarchs scored a 5-1 from Sam Masters and Derek Sneddon to take a lead that was never relinquished. We provided ten of the race winners.

There is a much more important match at Armadale on Friday night with Workington the visitors in our next Play-off match.