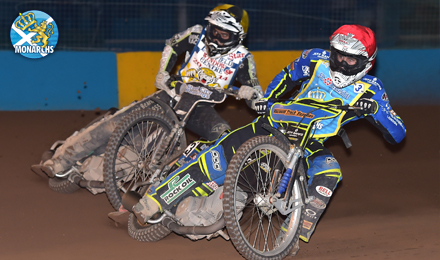 The Scotwaste Monarchs still have two away league matches to complete this season and the first one takes place this evening at Sheffield.

The Scotwaste Monarchs will be hoping for better weather this time after the last visit to Owlerton was rained off by a heavy shower just before start time.

The Monarchs are at full strength but Sheffield have been devastated by injury. They will be without Premier League Riders' Champion Simon Stead with Berwick's David Bellego coming into replace him. At number two they use rider replacement for Andre Compton. At three is Leigh Lanham. Four, replacing the broken leg victim of last week, Taylor Poole, is Mason Campton. Five is Nico Covatti, six Ben Wilson, who is flying at the moment, and at seven is James Sargeant, replacing the injured Josh Bates.

So it is very much a patched up Sheffield team that will take to the track tonight.

With four league points available tonight, the target for the Scotwaste Monarchs is to secure as many as possible and extend their lead at the top of the Premier league.