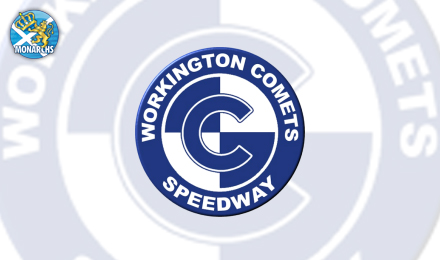 The Scotwaste Monarchs took a giant stride towards the Premier League Play-offs Final with a 60 -34 win over Workington at Armadale on Friday night.

Sam masters and Justin Sedgmen lead the way for the Scotwaste Monarchs but were both denied maximums by Workington's top riders, Ricky Wells, who won heat 15. Max Fricke dropped just one point in his first race and after a last in his first race Craig Cook was unbeaten by a Comet. Stevie Worrall started slowly but finished with two paid wins including passing both Comets in heat 14.

Derek Sneddon was unbeaten by a Comet in his first two races but then had two exclusions. The second produced a spectacular crash on the third bend in heat 12 that left Rene Bach with a suspected broken nose and out of the meeting. Aaron Fox had a good night with paid seven including an impressive win in heat 14.

Ricky Wells scored 12 and a bonus for the Comets and before his injury Rene Bach was involved in much of the action. Kevin Doolan didn't do as well as he had done seven days earlier and scored 5 and 2 bonus. Kyle Howarth withdrew after hid third ride having scored a solitary point.

Race of the night was heat 8 when Ricky Wells, on a tactical ride, stalked Justin Sedgmen before passing him only for Sedgy to cut back and take the lead again.

The Scotwaste Monarchs now need just a point at Workington on Saturday evening to qualify to the Play-off Final.