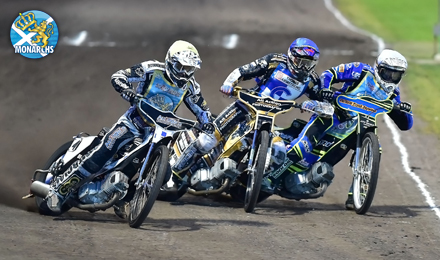 WE'RE IN THE FINAL

Scotwaste Monarchs romped to victory at Workington on Saturday night by 50 to 40 to top our Play-off group and qualify for the Premier League Championship Final.

It was another dominant performance from the team with the only hiccup coming in heat one when Craig Cook touched the tapes and in the rerun the Comets raced to a 5-1. A 5-1 from Craig Cook and Justin Sedgmen in heat 5 took as into the lead and by heat 13 we were ten points up. Every rider,except Derek Sneddon, won a race and we had ten race wins on the night.

Derek Sneddon, with hindsight, probably shouldn't have ridden. His painful right wrist had forced him to visit hospital on Saturday morning and when X-rays confirmed no break he decided to ride on. However, it didn't take too many bends of heat 2 for him to know that the vibration of the bike left him with great pain in his wrist.

The Comets were at full strength although Kyle Howarth and, to a lesser extent, Rene Bach struggled on the night. Ricky Wells was again the Comets top scorer with 10.

And so we wait for the winners of the other group. The final match in that group is on 10th October.