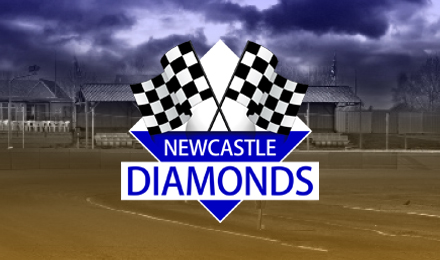 DIAMONDS MAKE IT TO SEMI

We've waited more than two months since we qualified for the Knock Out Cup semi final but at long last we can now confirm that our opposition will be the Newcastle Diamonds and they will be at Armadale on Friday for the first leg.

The Diamonds raced the second leg of their quarter final at Ashfield this afternoon and had an easy win against an injury decimated Glasgow team by 55 to 35 to give them aggregate victory by 108 to 72.

Aaron Fox was guesting for the Diamonds and after two pointless rides he crashed heavily in heat 6 and took no further part in the meeting. He has sore fingers but thinks that there will be no lasting damage.

The Diamonds have proved to be our toughest opposition this year at Armadale being one of two teams that have scored more than forty. The managed 41 just a couple of weeks ago with the final deficit being only seven points. And that was with Stuart Robson crashing out of the meeting in his first race.

Of course the Scotwaste Monarchs have done well at Newcastle with a one point victory and a draw.