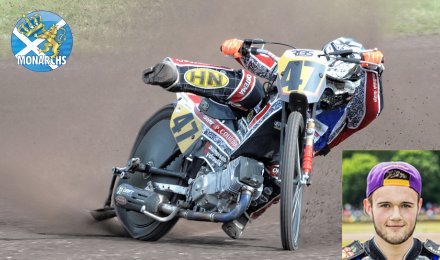 The Scotwaste Monarchs have finalised their team for the defence of their triple titles by signing the 19 year old World Longtrack Champion Erik Riss.

Erik is the son of former top motorcyclist Gerd Riss, and he is very keen to break into British Speedway. He comes with a strong recommendation from Kevin Wolbert, and the sports director of Landshut Speedway Stefan Hofmeister adds “I haven’t seen a better rider than Erik coming out of German speedway.”

Erik said “I am very pleased to be joining, I know that Edinburgh are the champs and of course I know Kevin Wolbert though not yet any of the others.

“I have two bikes I have been using in Germany, I will be bringing them to Edinburgh and get something else for Germany. I will stay over there when we have busy times and return to Germany when I have matches.”

Erik is relatively inexperienced in speedway having ridden only about 30 meetings in his three seasons of racing, but he finished the 2014 season with 11 points for his team Landshut in the German Playoff final. In the last nominated heat he defeated top men Jonas Kylmakorpi and GP star Martin Smolinski, though his team lost the final to Brokstedt.

He became the youngest-ever winner of the World Longtrack at Muhldorf last September just after his 19th birthday, pulling off a surprise against the more experienced riders in that branch of the sport.

“I’d say I didn’t expect to win the championship but I knew that I had a chance to be the youngest winner ever.”

He is aware that tracks in the UK will be tighter but doesn’t see that being a problem. “I like small tracks like in England, in Germany we have big long corners and I don’t like these. Kevin has told us about the tighter tracks.

“I’ve only been riding three years but we have been riding in the first division with Landshut who just missed first place. I think we improved a lot last season. It is my goal to be as good at speedway as I am at long track but that might take some time.”

His father Gerd was a multiple World Longtrack champion, and also a useful speedway rider. Erik said “My dad was the best German rider in the nineties, he had a wildcard in the German Grand Prix and came fourth which wasn’t too bad.”

“I hear a lot about Edinburgh on the internet and facebook and I can maybe help the Edinburgh riders get some meetings in Germany.”