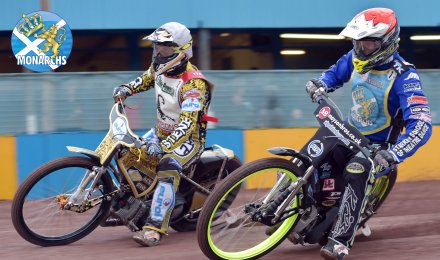 Craig and Theo a year ago Image Credit: Ron MacNeill

The Border Roofing Monarchs open the defence of their Premier League title this weekend with home and away matches against 2012 champions Scunthorpe Scorpions.

TEAMS FOR THE PREMIER LEAGUE MATCH AT ARMADALE ON FRIDAY 1st May (start time 7.30, doors open 6.30) are:

GRAND PRIX QUALIFIERS: Monarchs will have a lot of interest in the three Grand Prix qualifiers across Europe this weekend. Justin Sedgmen rides at Gorican, Croatia on Saturday and Craig Cook at Lonigo, Italy on Sunday. Both return for Monday’s match.

Other Monarchs’ assets Jozsef Tabaka and Max Fricke are also in action over the weekend, Jozsef at St Johann, Austria and Max also in the Lonigo meeting.

Sam Masters and Kevin Wolbert race at the end of May in Abensberg. All the competitors are racing for places in the semi-finals. Full lineups of this weekend’s meetings are below.

LEAGUE CUP: The Border Roofing Monarchs may well have qualified for the League Cup semi-finals but they won’t be sure till the weekend’s matches are complete.

Without going in to every detail, it would take huge home and away wins for Workington against Berwick, and a huge win for Newcastle against Sheffield, to stop Monarchs qualifying.

TEAM SWITCH: As well as the inconvenience of injury and GP events, Monarchs change their team order due to averages this week.

Sam Masters has the highest average on the Green Sheets (calculated over 20 matches and exclude bonus points) so he moves to no. 1.

It’s the first time since early in 2012 that Craig Cook has not ridden at no. 1. Craig said “I switch to no. 5 this week with Sam at no. 1, that’s fine by me, he deserves it. He’s trapping like a demon. People say we have a great rivalry but I’m too busy working on my own riding.”

SCUNTHORPE ON MONDAY: Monarchs travel to Scunthorpe for a Bank Holiday away match. Last year an away victory kicked off the successful league campaign with Craig Cook unbeaten for the second year running in the fixture.

SPONSORING ON FRIDAY: Supporters group The Mingers will be sponsoring the match on Friday and enjoying the evening from the George Hunter Memorial Lounge.

AUTY LEADS: Scunthorpe also have a change of team lineup with Josh Auty taking over their number one position. Josh has started the season well and at one time was an Armadale specialist, though he has struggled on recent visits. Expect a better show from him.

Experienced David Howe will be missing and rider replacement applies for him.

Of course the familiar figure of Theo Pijper will be lining up and number 5 and will be expected to score well. The other likely danger man could be Alex Davies who has dropped to reserve.

NEXT MEETING: Monarchs meet Newcastle Diamonds in the Premier League on Friday 8th May at Armadale.

RAGBAG: Monarchs have participated in the Ragbag initiative over the past couple of seasons and the amount raised is now over £1,000. This is co-ordinated by supporters Bob and Morag Miller and Derek Wilkinson. Any supporters wishing to assist can bring suitable material to the track. See www.rag-bag.co.uk for details.